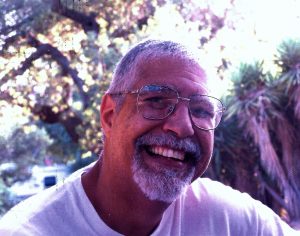 It is with profound sadness that I pass along this message to all the Songmakers who knew “Tito”.

Tito Young-Rodriguez died January 18, 2021 at USC University Hospital due to stage 4 cancer of the esophagus. He was admitted on Christmas Eve 2020. Both he and I expected chemotherapy and/or radiation and a full recovery or at least remission. Sadly, it was not to be.

Tito had been absent from Songmakers for quite a few years due to time constraints. Those of us who were lucky enough to have known him will forever remember him, never forgetting our times with him. He was an avid participant in many Songmakers campouts and hoots. His childlike enthusiasm that defined his entire being would spread to everyone near him. He would become childlike and absolutely giddy when he knew that he would be attending a Songmakers function. Tito and I played together for nearly 50 years. Tito introduced me to Songmakers and being the natural teacher that he was taught me more about music and life in general than words can express. His considerable degree of musical knowledge, his kindness, warmth, patience, respect, and tolerance were quite rare in today’s world.

Tito was larger than life with a personality to match. He spent 26 years as the Emergency Room physician in many different hospitals in the LA & Orange County area. Tito had a rich Puerto Rican/Native American heritage and grew up in Greenwich Village in New York sharing many stories of his experiences in the folk scene in which he immersed himself while also studying to become an M.D. having been inspired by his father and their mutual love of helping others through the world of medicine. The death of this humble man will be painfully felt by all who had the honor of knowing him. 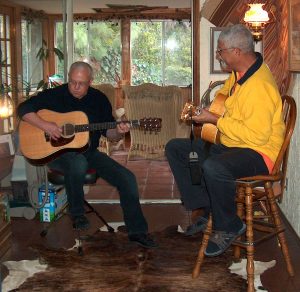 Bill Casaroli and Tito at home of Shaky Davis 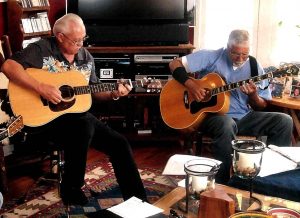 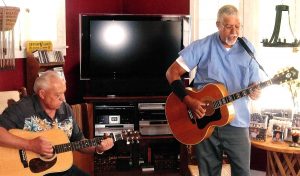 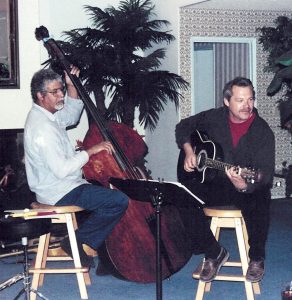