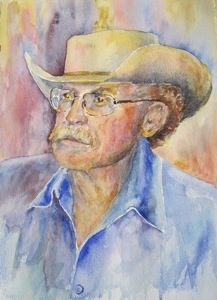 Long-time Songmaker Ken Graydon died July 30, 2010 of metastasized melanoma, possibly the result of being a red-head working outdoors all his life.

His first three albums, Windmill, Elissa, Spread Your Wings and Coyote Special were issued on tape. They are now available on CD. His last album, …The Way I Heard It… is still available.
All CDs are sold for $10.00 + $5.00 s/h.

“Additionally,” says Phee: “ his last concert with Ken Wilcox and Bruce Huntington at home on May 21 was recorded and a double CD set was made. It’s very nice and soon more copies will be available and will be sold at cost–as soon as we discover what that is. My hope is Ken’s music will be heard for years to come”. Ken and Phee were married for 32 years.  Ken was a president of Songmakers for three terms and Phee was a past president of Songmakers for four terms.

Here is a video of Ken singing his signature song, Windmill, at the May 21, 2011 party for about 100 of his friends. Ken Wilcox was on auto harp and Bruce Huntington on bass. 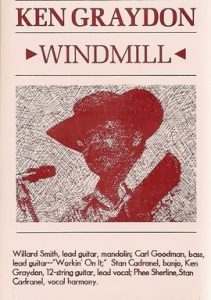 Our old friend lay dyin’, And we’d gathered to say our goodbyes,

Which we all did in our own way,

And he’d respond with a sigh, Or a squeeze of the hand,

Or the slightest smile,

He was pretty tired by then, But we knew by his eyes he could hear us,

Then things began to begin.

One fella just grabbed his guitar, Then another commenced to playin’

Some folks would come in to share in a song, And some would bring one of their own.

Or a mandolin, or a banjo,

To join in singing him home.

This went on for several hours,

And the songs were sung to and fro,

Then his wife said: “The family needs time with him,

Before it’s his turn to go.”

But on our way out, a sad young girl said, ‘I wanted to sing Grandpa a song’,

When she told us it sounded all wrong, But then when she started to singin’,

And gave her grandpa that song,

It didn’t take much understandin’ to know,

It was just the right thing all along.

Now later, we heard of a rumor, That was passed around among friends,

That we’d been called an Angel Band, By some who were there through the end.

Now I can’t speak to the truth of that, And I sure won’t call it a lie,

‘Cause that afternoon as our friend lay there, I spotted a chink in the sky.

And I know for a fact there was Angels that day, Right there in that room where we sang,

And they captured our voices and our guitars,

And my, oh my how they rang.

They took him along when they left, of course, It was his time you know,

But no one there will forget the day,

We sang our old friend home. 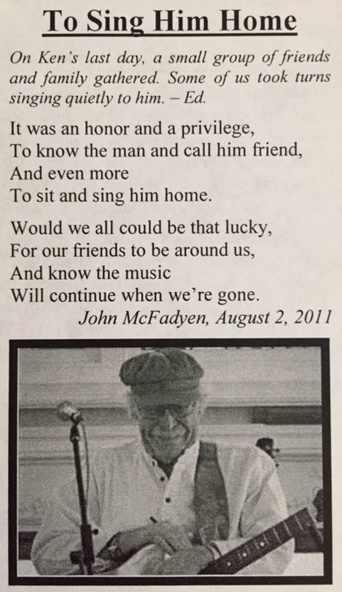 Renata Decher wrote this article about Ken Graydon in December, 1989:

Here is a song Ken wrote in 1983, It’s Time to Start Singing Again 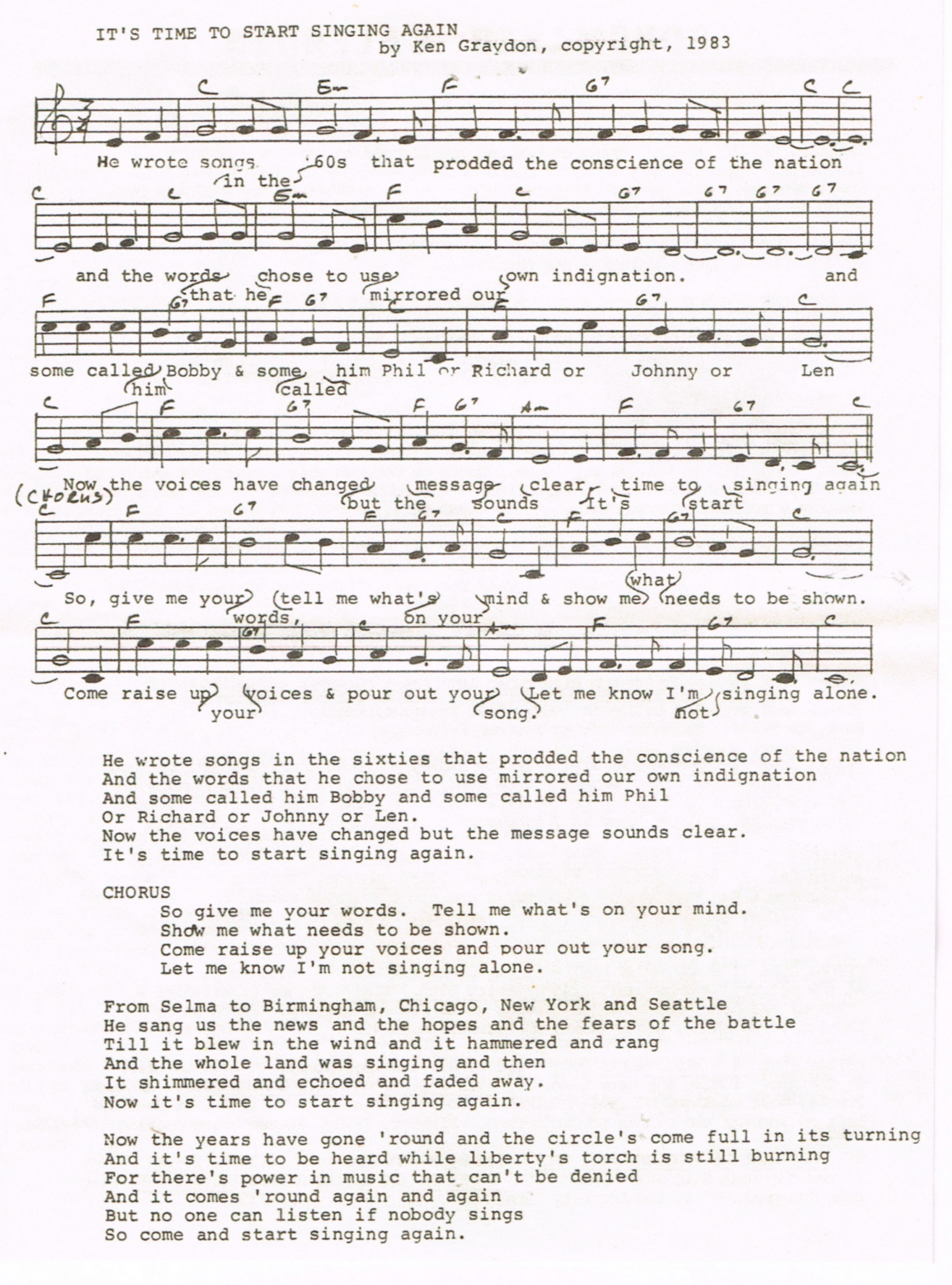 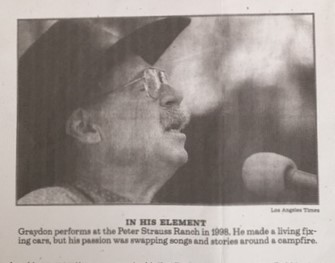 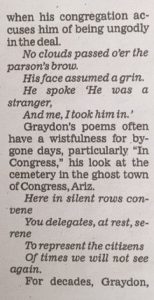 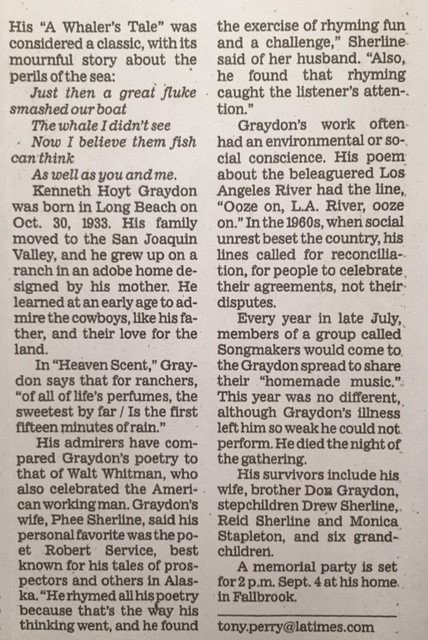 Here is a song that D’vora Gittelson wrote about Ken called A Steel-Driving Man, which was published in the Bard Chord in November, 2011 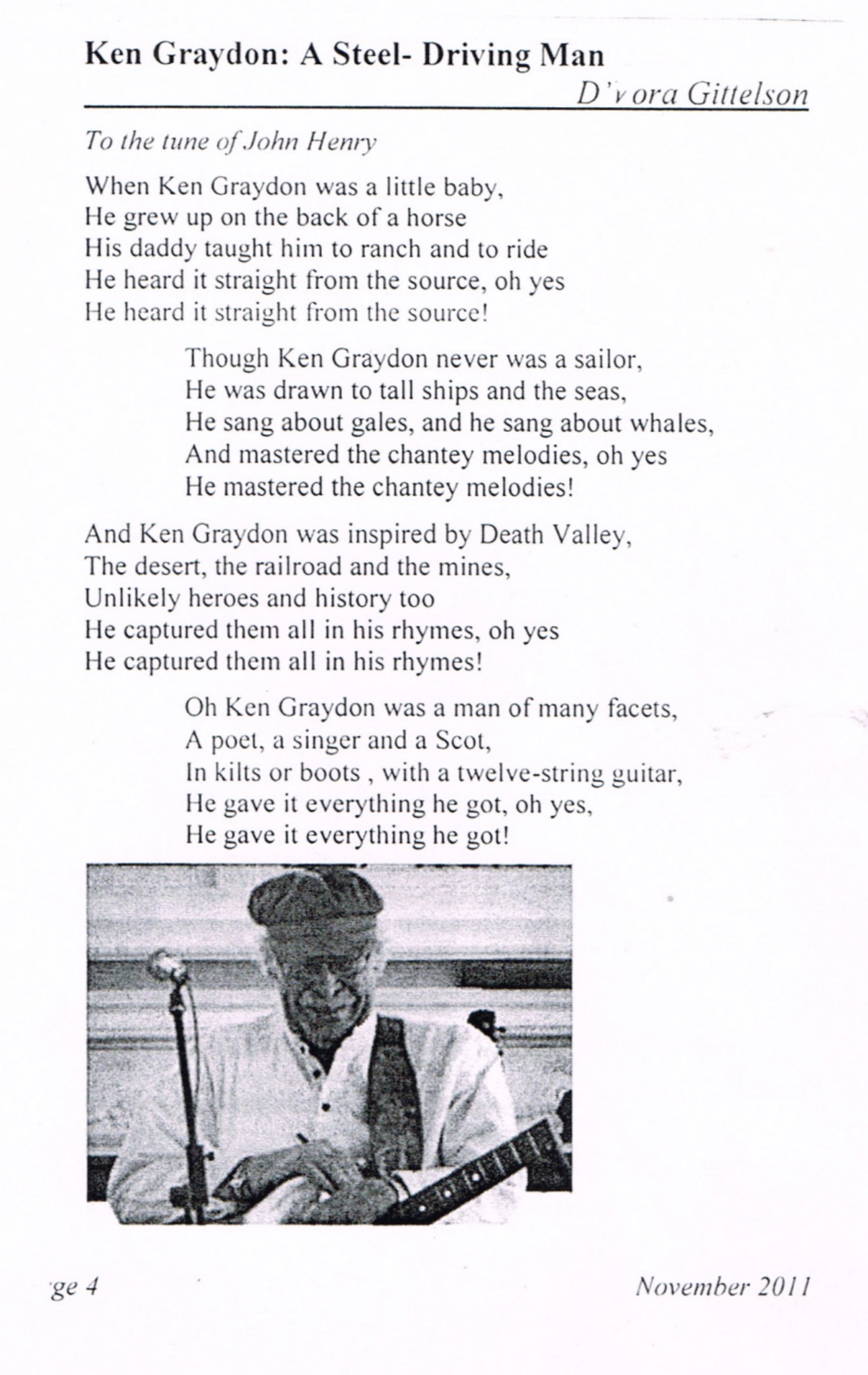