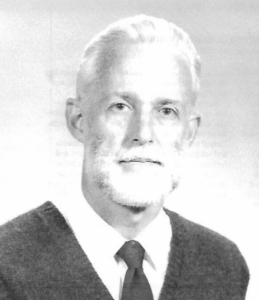 James Kevin (November 14, 1938 – December 27, 2020) was reared in Stillwater, Oklahoma, where his father taught at Oklahoma A&M College, now Oklahoma State University. He grew up working on farms and ranches during the summers and spent his leisure hours hunting and fishing. He attended A&M and majored first in forestry, then in wildlife conservation. It was there he learned to fly light aircraft.

He transferred to the University of Miami in Florida to study marine zoology in 1961 and enlisted in the Naval Reserve. After graduating in 1962 he attended boot camp, then served aboard the aircraft carrier Antietam. He later attended Officer Candidate School, trained as Navy diver and bomb disposal technician, and was assigned to the Proteus in support of nuclear submarine squadrons in Scotland, Spain, and Guam.

When his active duty ended in 1966, Kevin immigrated to Australia and worked as a commercial fisherman and bush pilot. Returning to the U.S. in 1968, he entered graduate school at the University of Washington in Seattle, earned a degree in oceanography, and studied commercial fisheries with a focus on aquaculture. As a Naval Reservist he served as a diver and translator of Russian documents. In the Pacific Northwest he discovered backpacking, an activity he would enjoy for over 30 years.

At 32 Kevin resigned his military commission and entered a Catholic religious order in California as a nonordained friar. Over the next 20 years, his assignments in the order took him to the jungles of southern Mexico, the Alaskan tundra, the Arizona desert, and inner-city Los Angeles, where he devoted 12 years in parochial high schools to teaching science, counseling students, coaching soccer, and leading student backpacking trips.

Trained in emergency medicine, he also taught first aid for the American Red Cross in Alaska, California, and Arizona. Maintaining his interest in aviation, he joined Civil Air Patrol at each assignment, flying search-and-rescue missions and teaching wilderness survival to CAP crews. In 1980, he attended the University of Notre Dame’s graduate program in the History and Philosophy of Science to study the relationship between science, religion, and magic. Upon his return to the Southwest, he continued teaching high school science and developed curriculum units that encouraged students to analyze complex topics like evolution and creation, geology and Genesis, and superstition and religion.

Kevin also served as a campus chaplain at several state universities in Arizona, southern California, and Alaska. At each of these schools, he Organized backpacking trips for the students and formed study groups to explore issues in science and religion. He also organized conferences and facilitated support groups for divorced Catholics.

Under a grant from the National Science Foundation, Kevin returned to Notre Dame in 1991 as a visiting faculty fellow to serve as associate editor for a research project in the history of astronomy that was published by Cambridge University Press. He became known as a children’s storyteller in museums, bookstores, and schools in northern Indiana.

In 1994 he ended his 24-year affiliation with the religious order and, when his research contract concluded, moved to Tennessee to attend a graduate program in Storytelling at East Tennessee State University. Upon graduating in 1995 he remained at ETSU as an adjunct instructor, first in storytelling then in philosophy.

From 1993 through 2000, Kevin worked for the Student Conservation Association, organizing and leading summer wilderness expeditions for high school volunteers. His young crews camped in remote areas across North America, building and repairing trails in national parks and forests.
His last two summer projects were at Hawaii Volcanoes National Park. During the intervening year, he remained on the Big Island as a volunteer with the National Park Service, guiding tour groups and conducting research into the history of early scientific investigations of the volcanoes.

Following four decades in service-related professions (military, ministry, and education), Kevin retired to East Tennessee, where he supported himself as a freelance writer, editor, and storyteller. In the Tri-Cities, he was a performing member of the Jonesborough Storytellers Guild and participated with Mensa, the “Don’t Touch That Dial” radio theater troupe at WETS-FM, and St. Elizabeth Catholic Church. He also belonged to “Songmakers”, a folk-music society in southern California.Kevin never married. He is survived by a sister, Kerin Kevin, in Stillwater, Oklahoma.

As per Jim’s request, there will be no funeral/burial service. He chose to be cremated, and then buried beside his father in Stillwater, Oklahoma.