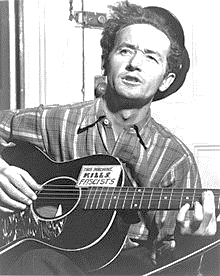 Did you know that Woody Guthrie helped to engender the organization we now know as Songmakers? Here’s a condensed version of his life story.

Woodrow Wilson Guthrie was born on July 14, 1912, in the small farm town of Okemah, Oklahoma. He was the second son of Mary and Charles Guthrie. His father–a cowboy, real estate speculator, and local politico–taught Woody Western songs, Native American songs, and Scottish folk tunes. His musical mother influenced Woody deeply as well, as did some of his musically inclined neighbors.

During his early years, Woody went through devastating losses: the accidental death of his older sister, the ruin of his family’s fortunes, and the institutionalization and eventual death of his mother from Huntington’s Disease. (Later his first two daughters and Woody himself would also succumb to the malady.) These dark early experiences helped Woody to develop his acerbic take on life.

In 1920, oil transformed Okemah into a boomtown, attracting thousands of workers, hustlers, and gamblers. A few years later, the oil stopped gushing and Okemah went bust. After that, Woody took to rambling around the country.

He married for the first time at 19, but during the Dust Bowl era, he left his wife and three children to join the countless other Okies who were migrating to California looking for work. At the Los Angeles radio station KFVD, he gained some notice playing hillbilly music.

Woody wrote songs all his life, many of them politically charged. Some of his best known are “This Land Is Your Land,” “Do-Re-Mi,” “Deportee (Plane Wreck at Los Gatos),” “I Ain’t Got No Home in This World Anymore,” ”Pastures of Plenty,” “So Long, It’s Been Good to Know Yuh,” and “This Train Is Bound for Glory.” Musicians who list him as a major inspiration include Pete Seeger, Odetta, Johnny Cash, Bruce Springsteen, Joan Baez, Jerry Garcia, Judy Collins, and John Mellencamp, among too many others to name.

He often performed with the words “This machine kills fascists” on his guitar. (Guthrie was frequently associated with U.S. Communist groups, though he did not seem to be a member of any.) A collection of his “Dust Bowl Ballads” has been named one of the 100 Records That Changed the World.

Woody was married three times and fathered eight children. During his later years, though ill, Guthrie served as a father figure to the American Folk Revival of the 1960s and ’70s, providing encouragement to a generation of new folk musicians and acting as mentor to Ramblin’ Jack Elliott and Bob Dylan. His son Arlo became a well-known folk-revival musician in his own right.

Here’s how Woody was involved with the origins of Songmakers: When Woody and Pete Seeger formed the Almanac Singers in the early 1940s, Woody became fast and permanent friends with fellow Almanac Singer Bess Lomax-Hawes. Ten years later Bess moved to Los Angeles and began teaching guitar to groups of students at local colleges. To practice their homework, some of her students formed the West Valley Guitar Group, and—along with a group called People’s Songs West that played folk music in LA parks—this soon morphed into the Songmakers of California. Woody’s address in the New Jersey hospital where he lived from 1956 to1961 was penciled into a roster of the West Valley Guitar Group in the Songmakers’ archives. The exact date he joined is not known, but we do know that Woody and his music have continued to inspire Songmakers in every decade since.

Woody said, “I hate a song that makes you think that you are just born to lose. . . No good for nothing. Because you are too old or too young or too fat or too slim too ugly or too this or too that. Songs that run you down or poke fun at you on account of your bad luck or hard traveling. I am out to fight those songs to my very last breath of air and my last drop of blood. I am out to sing songs that will prove to you that this is your world. . . I am out to sing the songs that make you take pride in yourself and in your work.”

On October 3, 1967, Woody died in Brooklyn State Hospital, New York, from complications of Huntington’s Disease. His spirit, so well embodied in his music, will always live in our hearts. ■