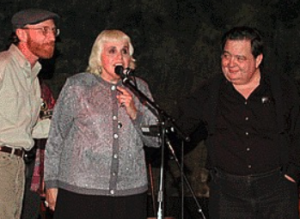 Roz Larman, co-creator and co-host of the legendary FolkScene radio program, passed away on October 10, 2016. For the last 46 years, FolkScene presented the best in folk music and folk artists every Sunday night on KPFK in Los Angeles and was also eventually syndicated across the country and streamed online. After Howard died in 2007, Roz continued to host the program until shortly before her death. It is impossible to measure the impact Roz and Howard had in promoting and supporting the folk music community.

Back when those wonderful folk concerts were being presented at the Neighborhood Church in Pasadena, Kathy and I had a fascinating conversation with Roz and Howard at one of the concerts about how FolkScene began. They disclosed that they were members of Songmakers in the 1960s, and Howard served as publicity chair. Howard approached KPFK with a proposal to broadcast a Songmakers hoot each week. KPFK took his proposal under advisement but took a few years to get back to him.

In the interim, one of the legendary Songmakers blowups occurred. The board decided to make a contribution to an orphans’ home in North Vietnam. Like many members at the time, Howard worked for a military contractor and feared that Songmakers would be labeled a Communist organization. If they were members, they might lose their clearances and jobs. So like many others, Howard and Roz left Songmakers (as it turned out, there was no danger because the U.S. Government itself was contributing to the orphans’ home as a humanitarian gesture; but no one knew that at the time).

After leaving Songmakers, Howard was finally contacted by KPFK, who informed him that they thought broadcasting hoots was a great idea. But since the Larmans were no longer members of Songmakers, they convinced KPFK to allow them to present a folk music program instead. And thus was born FolkScene!

According to its website, Folkscene will continue as a collaboration between Howard & Roz’s son Allen Larman, long time program engineer Peter Cutler, Deborah Hand-Cutler and Kat Griffin. For more information about FolkScene, go to www.folkscene.com.