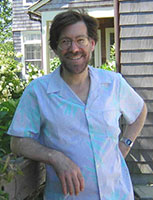 This obituary was sent to us by Suzanne Mantell, the wife of Songmaker Peter Friedman.

We’re writing to pass along the sad news that Peter died, at home, on Sunday, October 18 – his 65th birthday.
As many of you know, Peter was diagnosed with bladder cancer just about a year ago. In December, doctors replaced his bladder with a “neobladder” (a pouch surgically constructed from his intestine). But the cancer re-appeared. Peter spent weeks in and out of the hospital coping with a great deal of pain while receiving immunotherapy infusions — a treatment that proved unsuccessful. Our daughter, Rikki, moved down from the Bay Area to be with us. Rikki’s husband, Dan, was here much of the time. Peter had been discharged from the hospital and was receiving hospice care when he died.

Our thoughts and love are with Peter’s brother, Glenn, his sister, Jodi, and his nieces and nephews, Nina, Michael, Ben, Nikki, Karli Jo, and Anilee.

Not being sure the night before if he would survive overnight, Rikki, Dan, and I took liberties and celebrated Peter’s birthday at 9 pm Pacific Daylight Time on October 17, knowing that it was already the next day, his birth day, in New York, where he was born.

Peter’s parents moved to Berkeley from New York when he was a year old, giving Peter as he grew exposure to the tumult of Berkeley in the 60s, including marches, protests, and the free speech movement, some of which he participated in, all of which he remembered.

Peter was always curious about his New York roots. After two years as an undergraduate at UC Santa Cruz he left school, moved back to his parents’ house, and used his father’s well-equipped woodworking shop to build a beautifully crafted banjo. Then he and the banjo moved to New York, where his day job was repairing mostly high-end guitars in a midtown music store. In the evenings he often spent time at the Cornelia Street Café, a gathering place in the West Village for musicians and songwriters. He and I met on an overnight Sierra Club camping trip in the Catskill Mountains. After a time, we moved to California. Rikki was born in Berkeley a few years later.
Peter got his PhD in physics at UC Berkeley. The three of us moved back to New York, to an apartment we had managed to keep all the years we were in California. In New York, Peter commuted to Bell Labs in Murray Hill, New Jersey, and then got a job at Columbia University.

After ten years in New York his research group moved to Caltech in Pasadena. His job there was as project scientist and co-investigator on an exciting space project, the NASA GALEX (Galaxy Evolution Explorer), an orbiting ultraviolet space telescope designed to measure the history of star formation in the universe. It launched in 2003 and operated until early 2012. This work added to our knowledge of planets and black holes as well as new ways of identifying dwarf galaxies and understanding their evolution. (More details about Peter’s work can be seen on his LinkedIn profile: https://www.linkedin.com/in/peter-friedman/)

One would like to think that after decades of living with someone, their day-to-day work lives would become the stuff of easy conversation and explanation. Alas, it is not true. Peter’s work as an astrophysicist entailed complicated, other-worldly concepts that were not always easy to grasp, though he was skilled at explaining what he did and was always happy to do so when someone, not being intimidated by the word “astrophysicist,” got up the nerve to ask.

When NASA defunded the project Peter was on in 2012, and he was no longer employed (“soft money” had put him in a perilous position), he accepted the idea of “retiree” and grew to like it; it gave him time to explore a longstanding passion, music. As a graduate student teaching assistant at Berkeley, Peter had taught the physics of music. Now, years later, with physics off the table, he reconnected with music. He discovered Meetup.com and participated in meeting with groups of like-minded people who got together to sing; as he said, “Brazilian is my favorite music to listen to, but all the music I play seems to be from the USA or UK”–Beatles music, folk music, bluegrass, old standards. He would drive to music meetups all around town, sometimes three in a weekend—West LA, Van Nuys, West Hollywood, Los Feliz, Glendale, Sunland. He sang and he played the harmonica, and he was engaged and happy.

Peter loved having, discussing, interpreting, postulating about, talking to, and walking his dogs, and always wanted to stop and say “hi” to and pet other people’s dogs passing by on the street. His canine love lives on in our recently adopted rescue pit bull, Kitty.

Another passion of Peter’s was architecture, especially mid-century modern. We spent many happy hours on self-guided tours where we got to see the interiors of wonderful houses designed by Neutra, Lautner, Wright, and many other innovative architects. We would also take walks exploring different parts of Los Angeles, trying always for hilly areas. Peter would mark our route on a map in order to avoid taking the same streets twice.
Despite my profession as a dealer of rare and collectible books, Peter didn’t understand the appeal of physical books, though he liked my business and was totally tolerant of the massive number of books in the house. He loved reading, but did it electronically, first on his Kindle, and then on his iPhone. He was an early adopter of online ordering. “Why run around town from store to store looking for exactly what you want, and being disheartened when you can’t find it, when you can find exactly what you want online,” he would say.
He was extremely proud of Rikki, a registered nurse. Throughout his illness, which kept him in hospitals longer than anyone should have to suffer, he would introduce her to every single person who came into his room, “This is my daughter, Rikki. She’s an RN.”