– – With deep sadness we announce the passing of John Donn. He was 88 years old.

John Donn was classic. He loved classic guitars, classic cars and classical music. He grew up on a ranch back when children got .22 gauge rifles and roamed freely. He lived in a classic beach house for almost 50 years, and was the classical definition of a neighbor. A neighbor even to strangers, if your car ever got stuck in the sand before the invention of cell phones, John is the guy who showed up with a stack of boards and helped you out.

John was born in Hollywood and grew up near Placerville, CA. He worked on the ranch, rode his horse to school, and loved camping by the river. He was a volunteer plane spotter during WWII, and graduated from El Dorado County High in 1947 and Cal Poly San Luis Obispo in 1951. He served in the Air Force from 1951 to 1955 and went to Korea. He continued his studies at UCSB, where he met his future wife, OnaBeth. John and Beth were married in 1966, and had two children and 44 years together.

John worked for 30 years in defense contracting with companies Dynalectron and VSE. He did ship’s instrumentation and data collection in the Mariana and Marshall Islands aboard the USNS Wheeling. He liked to tell how he came face to face with a giant eel while swimming in the lagoon at Kwajalein. He also brought home a giant clamshell, presented to him by the chief of an island for personally seeing to it that they got their own radio tower.

Once retired, John began appearing with his guitar on the local folk music scene. What he loved most was singing together with others, and he made a lot of friends through music. Many of them will also remember him as the Payment-Refusing Guitar Repairman.

To his wife he was Saint John, the man who stood by her side through multiple sclerosis because, as he once said, “That’s the vow I took.” To us kids he will always be the Pancake King, having perfected the classic whole-wheat and buttermilk recipe long before whole grain started trending.

John is survived by his son Evan Donn, daughter Jennifer Donn and stepson Gregory Rudzinski. He will be missed by everyone who knew him. 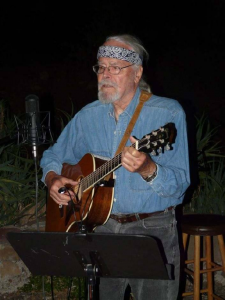 On December 29, 2017 long time Songmaker and friend, John Donn, went to be with God and his lovely Beth. His family has stated that there has not been nor will there be a public service of any kind per John’s wishes. Certainly, many of us will celebrate his life and the impact he had on his fellow Songmakers in upcoming Hoots and Song Circles.

Also, the upcoming CAMARILLO HOOT will be a celebration of John’s life. For so many of us this is sad news regarding his passing and yet I am happy too since it is my belief that John is back with Beth, the love of his life. A truly lovely man with a heart of gold & he’ll be remembered fondly. I always have and will always think of John whenever I hear a Kris Kristofferson song or reminisce about the Songmakers who have meant so much to me over the years.

Loving Her Was Easier

Mamas Don’t Let Your Babies Grow Up to Be Cowboys 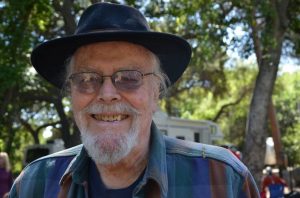 This is a very difficult task to write about one of my dearest friends John Donn.

I met John in a guitar class almost twenty years ago. I was playing my 1967 Gibson.

John noticed my guitar and a friendship was instant. John introduced me to Songmakers.

On my first trip to Kernville my travel guitar developed a problem and John was quick to loan me his spare for the weekend. I learned a valuable lesson to always travel with a spare.

Like most Songmakers guitar acquisition was soon in full force. I bought a new Gibson and John was as excited as I was. He called me the day it was to be delivered. We were on the phone when the UPS truck pulled up. As he was putting the phone down I heard him say, “Beth, I am headed to Alan’s.” He was there just as I was unpacking it. His warm smile appeared as he was playing the new acquisition.

John was very knowledgeable about musical instruments and help fuel my guitar acquisition. My bank account may be smaller, but I am a far richer man because of John’s friendship. John often did repairs on Songmakers’ instruments, he enjoyed the work and seldom charged.

John taught me many valuable life lessons. One was always set the bar for happiness low. I believe this was evident in John as he almost always expressed a warm smile.

John and Beth (before her passing) were fixtures at Songmaker gatherings. Kenny Grove weekends were among his favorites.

John and Beth were regulars at Cafe Voltaire, Zoey’s, The Fireside, The Camarillo Cafe, and any place else music was being played. John and Bob Kroll built the Fireside concert series to what it is today. John helped me to launch a ukulele gathering at Java Joe’s and was a regular attendee. The ukulele group now meets twice a month and has grown to 270 members with 50 gathering to sing and play.

It is often said about folks, but for John it is a fact, I don’t believe John ever met a stranger. John was a highly intelligent man, he loved reading and doing research on just about anything. One of our last trips together was to Music in the Mountains. During the car trip we discussed many items from music to politics. Although we sometimes had different views we always had great discussions. On that trip not only did we have a great time playing music, but we solved many of the world’s problems. Too bad the world did not listen.

Songmakers has been an exciting venture for me. I can’t imagine life without all my Songmaker family and I owe it all to John. I will miss him, but I know he is here in spirit and song. As the title of the song by Jimmy Adams, “You may be Gone, but not Forgotten”.