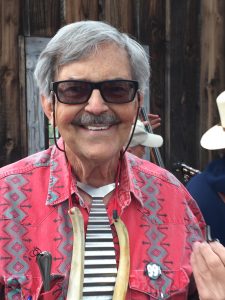 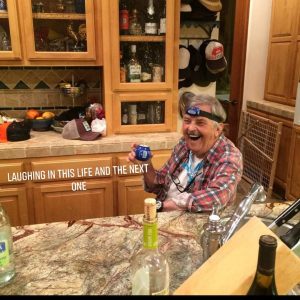 Don Wallace, aged 78,died on January 29,2019 from cancer. He was an active Songmaker for several years. He attended the Agoura song circle, the Thousand Oaks Hoot and was known for his fun ties and story-telling. He spent his life helping others. He was an L.A. City Firefighter, deputy for an L.A. City council person, a Union activist, and a local Santa Monica mountain advocate. His obituary follows:

Don Wallace, a longtime Calabasas resident, died Jan. 29, 2019 from cancer, leaving behind a legacy of environmental, political and labor rights triumphs that still resonate in the area today. He was 78.

Wallace wore many hats over the years: Los Angeles Fire Department captain, L.A. County deputy supervisor, Las Virgenes Homeowners Federation member. He also was a staunch open space advocate and the horseman’s friend.“He was a friend to equestrians, a supporter of open space, an advocate for oak trees and so much more,” Agoura Hills City Councilmember Illece Buckley Weber said. “Don’s contributions to our region are immeasurable.”

Wallace’s impact on local firefighters was also groundbreaking. Back in the 1960s and ’70s when Wallace worked for the department, fireman salaries paled in comparison to what they are today. “Firefighters had to work side jobs as plumbers (and) electricians to make a living,” said Jeanne Wallace,Don’s wife of 57 years. Determined to change that, Don Wallace became active in the United Firefighters of Los Angeles County, Local 112. In 1970, he became president of the union and began working to negotiate the fire department’s first labor contract. It was a tall task, compounded by the fact that he and Jeanne had purchased property in the Santa Monica Mountains and were in the midst of trying to build a home there. His fire department brethren had his back, though: They insisted on building the couple’s home without charging them for the labor. “They told Don, ‘You go downtown and fight for us and we’ll build your house,’” Jeanne said. Their trust in Wallace paid off. A labor contract was negotiated that gave firefighters pay hikes and full benefits. Instead of having to moonlight, firefighters could focus their job at hand—protecting lives and property during fires. Union membership swelled under his watch, growing from under 100 members into a 3,000 strong. After 26 years with the fire department, Wallace switched gears and joined Edmund Edelman’s staff, managing the L.A. County Supervisor’s West San Fernando Valley/Las Virgenes district office. As a deputy supervisor, Wallace worked with local and state government agencies, homeowners associations, chambers of commerce and service groups on public safety and environmental issues. Upon Edelman’s retirement in 1994, Wallace made an unsuccessful bid for the county supervisor’s job against Zev Yaroslavsky.

Kim Lamorie, president of the Las Virgenes Homeowners Federation, called Wallace a “trailblazer for sure.” And he was—quite literally. After 40 years of knocking on doors, making phone calls and going to meetings, he finally saw a hiking trail that he’d been dreaming of become a reality in April 2018. The Don Wallace Multi-Use Trail Connector is a 1,518-foot trail connecting the network of Santa Monica Mountains hiking trails on the south side of the 101 Freeway to the trails on the north side, passing under the freeway via a concrete channel. Besides a focus on trails, Wallace made contributions to the county’s North Area Plan to protect the mountains from over-development and also worked on Malibu’s Local Coastal Program.

Ruth Gerson, an Agoura Hills resident and longtime friend of the Wallace family, said Wallace “was an ethical man with a wonderful sense of humor, a twinkle in his eye, and a passion for trails and horses.” Brian Boudreau, owner of Malibu Valley Farms equestrian ranch, called his longtime friend “nothing short of the voice of the Santa Monica Mountains.” Boudreau joked that when Wallace got involved in heated debates about mountain issues, his voice was among the loudest, “but often the most uniting. His devotion wasn’t to any interest group, individual or cause, but rather to the overall protection and preservation of a lifestyle founded on the balance of nature and everyday living,” Boudreau said.

In addition to his work with the Calabasas Cold Creek Property Owners Association, Wallace served as associate director of the Santa Monica Mountains Resource Conservation District for nearly 40 years. Wallace was appointed to the job by a special district and advised the group on soil and water conservation issues. Over the decades he also served as commissioner and vice chair of the Santa Monica National Recreation Area Advisory Commission and was a board member for the Coalition for Clean Air and the Los Angeles League of Conservation Voters. He also chaired the Rocketdyne Cleanup Coalition.

Wallace is survived by his wife, son Mark and six grandchildren. Their second son, Brian, died of cancer at age 52. The couple also informally adopted three children after a family friend died. Tommy, Debbie and Sherry Cooper lived with them until adulthood and are still considered family.

A public memorial service for Wallace will be held Fri., March 15 from noon to 2 p.m. at the Frank Hotchkin Memorial Training Center, 1700 Stadium Way, Los Angeles.