David Jenett, a Navy Machinist Mate 1st Class, and Gladys met before joining the service and would marry after the war. The New Jersey natives would be married for more than 60 years.
Gladys passed away on Aug. 10, 2014 and David passed away Jan. 6, 2015.

“For over thirty years, Dave and Gladys attended nearly every hoot every month.  They were joined by their best friends Marian and Dean Kenny. They were the first to arrive and the last to leave. Dave was known for his fantastic memory of country songs – over three hundred he claimed.  For many years he helped with the sound system for the Roundups.  He enjoyed taking breaks on his harmonic and in later years taught harmonica to seniors at the local senior center. Gladys didn’t perform but she enjoyed singing along and was an enthusiastic listener.  They are both missed by their longtime Songmaker family.

An enthusiastic, humorous and affable raconteur, he shared during an interview that he had a playlist of over 300 songs in his head (“I have a computer between my ears”), plays guitar and harmonica, and sang with a number of notables that included, to name just a few, Pat Boone, Kenny Rogers, Roy Clark and Mickey Gilley. There is a recording of him on the Steve Durfee Collection, Tune Town CD # 6 Priceless Treasure”. 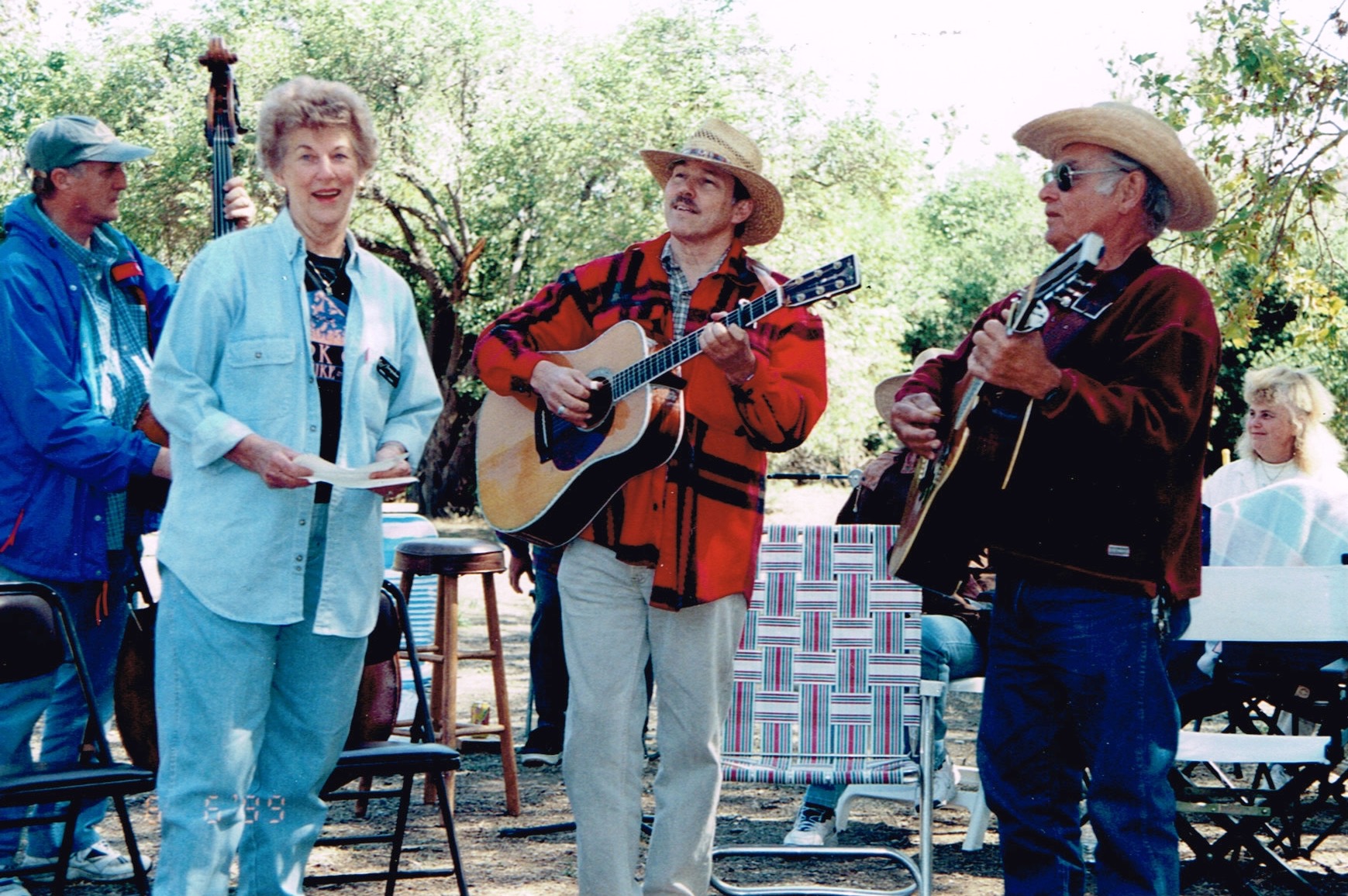 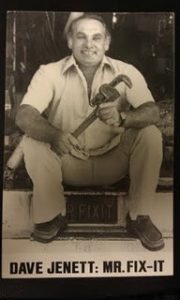 Dave Jenett has lived an accomplished and fulfilling life, including a taste of stardom as the television personality Mr. Fix It.
He appeared hundreds of times on morning shows such as “Alive and Well” with host Joanne Carson and has even been a guest on the “Late Show” with Dave Letterman. In thirty years working for celebrities, Don Rickles, Raquel Welch and Linda Evans, to name a few, he has remained a humble, honest and joyful man.

Born in 1926 he grew up in Newark, New Jersey. As a shy child he excelled in mechanics and attended a boy’s technical high school in place of a traditional institution. His mother instilled in him the importance of honesty and respect.

Jokingly Dave exclaims, “My mother gave me a curse (honesty and truthfulness), because of that it took me an extra ten years to become financially successful.”

He has sixty-five years of experience repairing machines of all kinds. When he would walk in to a hardware store Dave would always hear other repairmen talking about their court dates for that week. Staying true to his ethics has served him well and he has never been taken to small claims court.

Dave and his wife moved to Los Angeles in 1969, a few years later he was offered a two hour spot on KABC radio helping callers with their repair inquiries. He has a true drive to help and teach others what he knows, the calls flooded in. After his radio show ended for the day he would sit in a back office and advise callers about their fixes. Dave felt it was his responsibility to maintain his ethical stance even more so because he was beginning to receive clients via his radio show.

Later in his career he was invited as a guest on many morning shows including “Alive and Well” with Joanne Carson. He recalls guiding Joanne through a faucet repair live on television and her excitement in repairing it, showing women can repair anything successfully. Dave enjoyed teaching others his trade.

He received his Los Angeles Unified School District (LAUSD) teaching credentials in three weeks and began teaching at technical high schools, like the one he attended. Dave taught many variations of repair, mainly air conditioning and refrigeration. Substituting a class he remembers a student timidly looking over his shoulder while he repaired a furnace. Dave invited him to squeeze up inside the furnace with him to show the student how the repair was done.

His radio and television personality, Mr. Fix It, is reserved only for those venues. Now age eighty-five Dave lives in Beverly Wood, CA with his wife. He is still a kid at heart, playing music with his friends and riding his Harley Davidson. He believes through strong ethics, desire to help others and a hard working attitude came his success. He maintains he is just a good repairman.

He explains, “You have to know your true abilities and if they satisfy you truthfully then make use of them.”